If programming languages were literary genres...

From a conversation at the pub this evening with Jonathan and Glenn...

...and somewhere around there, we ran out of steam. Java as corporate mission statements? Not quite... VBA as newspaper cartoons? Hmm. COBOL as... God only knows. And we couldn't even place Python.

Anyone got any ideas?

And the same to you too, Google!

While we're on the subject of rude words... I hope that Google aren't showing this kind of CAPTCHA to french people... 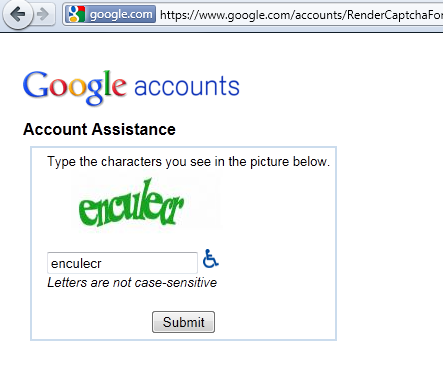 I've been trying to cancel Resolver's Yahoo! Search Marketing account over the last day or so; it's not generating enough traffic to be worthwhile. The cancellation process is a little buggy.

Posted on 4 November 2009 in Blogging, Funny

I'm sure everyone has encountered the kind of spam blog where they're scraping posts from someone reasonably well-known -- presumably via RSS -- and presenting the results as their own, normally with a million Google ads on the sidebar.

Here's a new (to me) twist on that. I spotted two new incoming links to my WebGL blog. One was a (very brief) mention in a roundup from Dion Almaer on Ajaxian, an Ajax community site. The other was on "tutorials4html.com".

A lot of great news is coming in via Twitter. I make a lot of Ajax comments under @dalmaer and wanted to give you a roundup on the month of October via Tweets. Always interesting to take a glance at the month. What do you think?

A aggregation of enthusiastic programme is reaching in via Twitter. I attain a aggregation of Ajax comments low @dalmaer and desired to provide you a roundup on the period of Oct via Tweets. Always engrossing to verify a spring at the month. What do you think?

Well, yes. It certainly is always engrossing to verify a spring at the month. Couldn't agree more.

What impresses me, though, is that they've clearly automated this. There's no way a paraphrase that bad could have been written by hand (or if there is, I never want to meet its author) so presumably they have some kind of program doing it. Maybe they run it through Google translate a few times?

A funny idea from secretGeek...

Praying that this isn't a hoax...

Will Clark is set to direct "Pride and Predator," which veers from the traditional period costume drama when an alien crash lands and begins to butcher the mannered protags, who suddenly have more than marriage and inheritance to worry about.

Spam subject line of the day

Cats and robots. What more does a meme need?

A Thinking Ape's Critique of Trans-Simianism

Klomp's primary argument rests on what he calls the 'Quickening,' an imagined point somewhere in the future when the advancement of 'culture' occurs so rapidly that its pace will far exceed that of biological evolution. In his own words,

"There will come a time when within a single generation we will develop one or possibly even two new ideas.... Current advancements in the 'bow' and 'arrow' industries suggest an exponential trend in the expansion of our technological capacities. We are able to perform hunts in a fraction of the time it took our ancestors, thus freeing up valuable time to 'think' of new ideas. In the post-simian world, we may develop into a species that is not only intellectually superior to our current state, but capable of feats beyond the comprehension of a contemporary simian."

Pardon this author for not holding his breath.